In an interview with VeloNews Tim Johnson, a respected US pro racer, talked about the fact that racing isn’t just about being fit. If it was then we’d just race time trials and hill climbs. There’s a reason why we have mass start races – it introduces the idea of tactics into bike racing. Suddenly it’s not about your FTP or your max 5 min power or your watts/kilogram ratio. That stuff helps, of course.

On the other hand I’m sure you know of racers that have really good numbers yet may not get appropriate results. You may be one of them.

Physical fitness constitutes just one aspect of mass bicycle racing. It’s critical in time trials, in any climbing situation, and in events that last longer than a rider’s endurance. However, once a rider has enough endurance to finish a mass start race then suddenly a number of other factors enters into the equation.

As a not-so-gifted racer I’ve had to overcome a low FTP when racing. My FTP hovers in the 210-220w range. My weight typically sits between 75 and 80 kg. This ratio precludes me from climbing with the climbers, and the low wattage makes me a poor time trialer.

On the other hand, with my weight down to about 72 kg, I managed to earn enough points to upgrade to Cat 2. Not only could I do well in races, I could even make moves during the races. 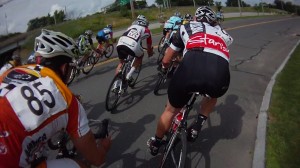 3rd to last turn on the last lap of a P123 race. I’m an out of shape Cat 2 in this picture. How would you have approached the next two corners?

I can help you make a monumental leap in your bike racing by teaching you some of the basics of racing. The coaching comes in two flavors, in person and virtually, and in three stages.

In Person Coaching: The best coaching you can get, but extremely limited in terms of time due to my schedule. Basically this consists of riding with the student, giving tips, pointers, and doing drills. This does not need to go on very long. Once the student learns the basics there is no need for this coaching. The only benefit in continued coaching would be to practice drills which cannot be done alone or even in pairs.

Virtual Coaching: The best use of time for the student. I will analyze your race reports, your power file, and, if available, your point-of-view video (bike or helmet cam). I will make recommendations about your racing, your tactics, and how you make your efforts. Recommendations can range from technical (“Use a bigger gear in that situation…”) to tactical (“Attacking at that point wasn’t a good idea because of…”).

1. Riding technique/skills. This can happen during base training so no racing necessary. This work consists of honing group riding and solo riding skills. A rider can work on their solo skills easily but group skills require a group of riders committed to practicing appropriate techniques.

We did group riding drills at UCONN and turned out a pretty impressive (to me) group of riders. Our riders felt comfortable with side-to-side bumping, most felt comfortable with touching their front wheel against another rider’s rear wheel, and all of them could do trackstands, pick up bottles off the road, bunny hop, and make emergency stops. One rider actually beat me in a race in the spring, a race that was my first target race. To do this type of work the coach and the client need to ride together.

2. Pedaling technique, for lack of a better term. If you didn’t grow up riding a bike day in and day out then some of the techniques will feel foreign to you. Clipless pedals and bike fit amplify these feelings, especially to those newer to the sport. Part of it is fit, part of it is pedaling technique.

I advised a rider who had been racing a couple years at that point. He asked me for feedback on his position, with an open mind to having the fit altered as necessary. After significant changes to his position he went out for the next three weeks and won the Tuesday Night races as well as placing on the podium in his last target race of the season. His fitness didn’t change from one day to the next but his position did.

Pedaling technique can help significantly. One rider gave me some of his power numbers; he’d been getting coaching from a national level coach for a year or two so fitness-wise he was fine. However the power numbers didn’t look right so I gave him some pedaling tips via email. He improved his 5s power by 40% on his first ride out after reading my email. It wasn’t fitness, it was simply technique, and based on his peak power I knew his 5s power was too low. This type of coaching needs to happen after base but it can happen in the first year of racing. In the example I list the rider is a Cat 3 with 2 or 3 years of racing under his legs.

3. Tactical coaching. This can happen in the first year of racing but is most useful after the rider has done 5-10 races. If it happens from the start this kind of coaching can inhibit a rider tactically since they won’t try everything first. Tactical coaching allows you to maximize your fitness and, more importantly, the type of fitness you have.

The rider example above, he shared a bike cam clip of a finish earlier this year. He approached the race finale properly for a sprinter type (field sprint finish). I gave him some ideas on approaching the corner when in a pack, taking into account the exact course, his power curve, his riding style, and the extremely experienced competition (one or two ProTour pros, many racers with 10-20 years experience racing). He got second in a field sprint there recently – based on his numbers and his position it would have been difficult for anyone to come around him and at the same time it’d have been hard for him to actually win. Last year I gave him some advice when he was racing at Bethel. He instigated a break, drove it hard at a critical time (we almost caught them), and then got 3rd after 2 guys escaped the break. He was determined to make a break stick and I told him how to get it done.

With another rider, at Bethel as well, I gave him some tips one week after he consistently almost won for a few weeks. His fitness was fine but he didn’t know how to take advantage of it. After my advice that week he won his race.

Please contact me for options at akira underscore sato at yahoo’s email service.